I don’t make a point of blogging like I used to ask I feel ‘all talked out’ over how adoption affects me on a daily basis.  My son will be 40 in August and I will be 60 in November yet I’ve only had 5 years of contact in my life with him.  That includes him living with us for almost 2 1/5 years which wasn’t enough time to truly heal and my heart was ripped to shreds a second time.

I cannot explain to family how hard it’s been over the past forty years as none of them have had a child adopted out let alone against their will.  The closest I could get to explaining was back in 2019 when one of my niece’s and husband lost their second child toEdward’s Syndrome.  They, their son and close family members had a day with her before she passed on.  It will never take the pain away and I am just thankful they could have that time together with their beautiful angel.  I would have loved to met my great niece but we didn’t know if we would get to the hospital in time as we live about 250 miles away.  She is still with the family in spirit and has been included in the family tree with a picture as she will always be part of our family.

When my sister and I talked before and after about her beautiful granddaughter I had no problems saying I couldn’t begin to understand what my niece / her daughter was going through.  My son didn’t die.  Yet a piece of me died after he was born as I knew I was losing the battle to keep him even though I was quite capable of raising him.

I became severely depressed but thought it was post natal depression.  I emotionally shut down as it was the only way I could cope and to the world I moved on.  That couldn’t be further from the truth but I couldn’t cope with my emotions so it was a battle to stay alive.  I’ve lost count of the times I have overdosed but only went to hospitalised once which was because I was unconscious.  The following day I refused to talk about it and wanted to go home and the doctor couldn’t force me to stay or talk.  Instead I continued with my daily battle to carry on pretending nothing was wrong.

Even with me finding my son within days after his 23 rd birthday didn’t help kickstart real heaing.  Don’t get me wrong I will be eternally thankful that we reconnected so I know he is alive and well but …. I didn’t get my baby back, I found an adult.  I never stopped loving him and never will but I can’t make him like me.  In the time we had contact he learned the reality I had wanted to raise him, that I had wanted contact if he was willing.  Instead he believed I hadn’t wanted him, that he had to accept I ‘didn’t want to be found’ – I have seen the proof in the form of a letter from a family member.  My finding him crumbled his world around him as he learned the truth I had always wanted him and as I had been denied that right so reconnecting was the next best thing.

I couldn’t even have that as I should have done as the same family member couldn’t understand why my son wanted to know.  His only family was his adoptive family and I was nothing to him according to the family member.  That attitude is cold hearted and yet that person would never have said that had they gone through the same experience of an invisible amputation. 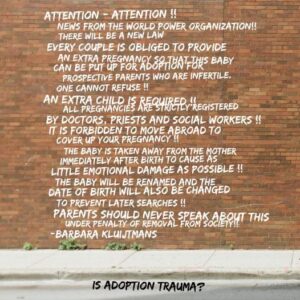